LiveChat is a real-time, live-chat software tool for ecommerce sales and support that is helping ecommerce companies create a new sales channel.

Polish SaaS company LiveChat has been building chat solutions since way before chat solutions were sexy. But as it turns out, being way ahead of the game has its share of high hurdles as well as vast opportunities. I took a trip to Wroclaw to find out more…

“I wouldn’t say we’re a startup anymore, but this kind of atmosphere works better for us.”

I sat in the loft room of a big, very old house in the Polish city of Wroclaw — the CRM business LiveChat calls home. I was here to chat with Szymon Klimczak, the company’s CMO, to understand the story of LiveChat’s growth, after initially starting out as an Enterprise-focused tool way back in 2002.

Listen to the full interview with Szymon here, as part of our SaaS Open Mic podcast:

The death of on-premise solutions

When LiveChat was conceived, Software-as-a-Service was definitely not a well-recognised term. Back then, the way that one built and sold to enterprise was by writing some software to run on a client’s own network, then sending your sales team out into the world to do the hard sell, hopefully ending with a big perpetual license and a team of people to do the on-premise installation.

As Szymon explained, sales cycles in those times were often 6-18 months(!), as they chased many of the larger banks and financial institutions of Poland. Things weren’t exactly failing, but they also weren’t on a trajectory to unicorn stardom (not that anyone was using the term ‘Unicorn’ back then either…). And then things got a lot worse.

“What hit us even harder was the financial crisis in 2008/9. That could have actually destroyed the company, but instead we decided to pivot to a SaaS model.”

The financial crash left LiveChat chasing target customers who had far bigger concerns than investing in a hefty on-premise CRM product. This left the company wobbling on the precipice of a startup graveyard. Something had to change. And thus came what was probably the most formative moment in the company’s history: The move to SaaS.

Szymon told me that although the core business fundamentally changed during that transitionary period, the core product did not. Its value to customers also remained: Connecting businesses with their customers and increasing customer happiness. Albeit targeted towards smaller businesses, on a larger scale.

“It was easier to sell globally to many customers than to sell to larger enterprise customers at that time.”

“Being in Europe and trying to do a SaaS company… was hard and challenging, for many reasons… it was very hard for a European company to start accepting credit cards…”

To understand the trouble that the LiveChat team went through to try and set up a true cloud-based SaaS model, you first need to understand the cloud software market at that time. Probably the toughest space was accepting and managing recurring payments. At a time with no Stripe, Recurly or similar solutions simplifying payments for small businesses, the only option was to roll your own billing system.Eventually, PayPal entered the scene as the first major solution available to the European market, but it definitely wasn’t designed to accept recurring payments in a subscription-based business.

Szymon told me how at one point they designed a system where they had to send out an email to every single customer, once per month to remind them to go and pay for the next month’s service. Imagine the impact on churn, when every single subscription customer needs to remember to make a payment at the end of the month to continue using the service!!

“The business is growing, but it’s always been a challenge for us to manage this growth because we don’t have a sales team…and we don’t spend money on advertising.”

How do you grow to more than 15,000 customers, with no sales team? And more importantly, *why?* Turns out, it all comes back to that fateful period in 2008 when the business came so close to being forced out of existence. I can see now, in almost every aspect of LiveChat’s business, that they learned a priceless lesson first-hand, in having everything they do brought into question — One that most younger startups today certainly don’t have ingrained into their DNA.

Sustainability is, and will always be a core value of the company. And to Szymon, Inbound Marketing always trumps other methods of growth when it comes to operating in a sustainable way.

“It’s always been about the inbound marketing for us, and whenever we’re approached by companies that would help us advertise our product, whenever we compare the acquisition cost…to an acquisition cost that’s close to zero, they’re always in last position.”

It was clearly during that huge squeeze when the company had almost no money to spend on servers – or even people – that the team put their heads down, and learned how to grow, through methods requiring no real budget. And it’s fair to say that they got good at it!

Today, the key types of Marketing for the company are SEO, affiliate channels, resellers, word of mouth, content, branding and online marketplaces to name a few. All that has taken them to more than 15,000 customers and enabled them to list on the Warsaw stock exchange in 2014. 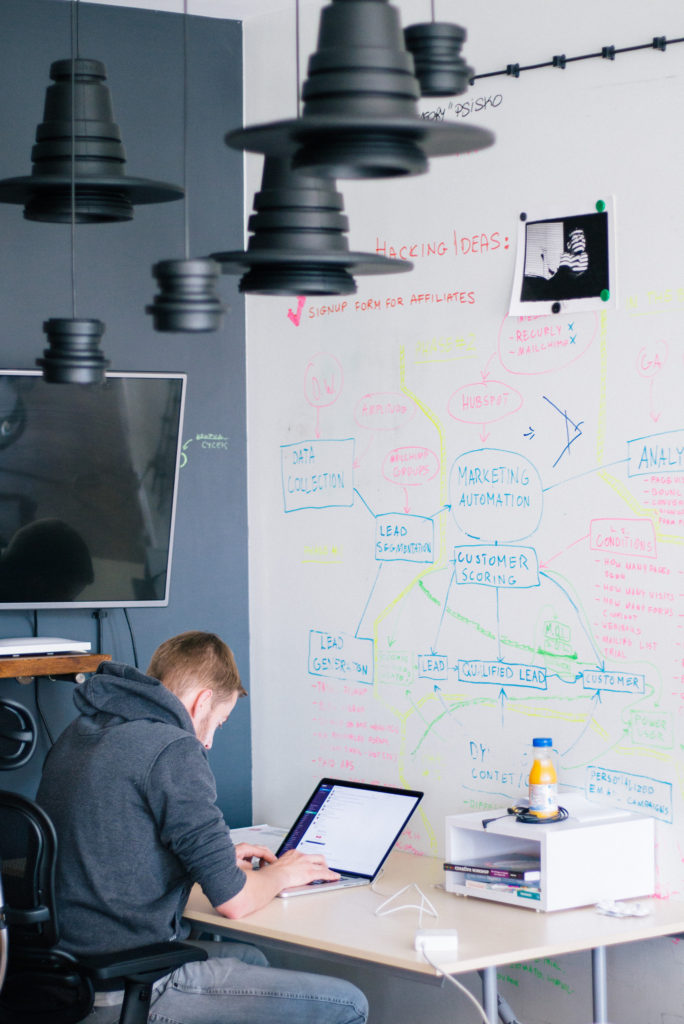 The inherent risk of freemium

“When you look at the market of chat solutions, you’re going to learn that we’re one of the most expensive products out there.”

The Sustainability story plays a part in the product’s pricing, too. There are no free plans available, something that isn’t so common in the B2B chat app space. Szymon argued that supporting free customers (that will likely never become paying customers) creates far more issues than opportunities.

The other part of this reasoning that became clear to me was the refusal to compromise on product experience, even for non-paying customers. They want to ship the same high level of experience to everyone, and this would mean paying a lot to support customers effectively bringing in little or no revenue.

“We perceive that (freemium) not as a source of leads for us, but as a cost.”

The rise of chat apps

The Chat ecosystem and its surrounding services and solutions is bubbling up to an inevitable boiling point. All of the big players in tech own a platform which features chat as the primary interface (whether voice or text), and the intersection of this emerging form of UI with Artificial Intelligence presents a wealth of opportunities for the future of human interaction with software.

As a product which has existed way before the buzz-words of the moment included ‘conversational interfaces’ and ‘chat bots’, I wanted to know how Szymon saw this shift — perhaps as a threat to their core business? Turns out, for LiveChat it’s a huge opportunity to be part of something big and exciting.

“The recent introduction of the Chat Bot API from Facebook is a huge opportunity, and we’ve been working on the integration with Facebook for some time now…we love that the environment is changing.”

So, does that change your core vision at all?

“It’s not about where the communication happens, it’s always about the fact that you need to respond to that customer…. that’s our approach, to focus on the customer, not on the medium that he’s using.”

There are definitely new problems emerging from the need to communicate with customers over a multitude of different channels. Users today have the expectation that they can get support from a business on almost any social platform of their choosing. And for the business, there’s not much choice other than to make sure they exist on all relevant channels – this is clearly a problem that LiveChat is well-positioned to solve. Their customer service software now boasts over 50 integrations with different platforms.

“It’s not that the companies will decide where they want to contact the customers, it’s the users that will decide.”

Whilst it’s clearly important for a publicly-listed SaaS company to report financials, this doesn’t include SaaS-specific metrics, which are almost never a component of public SaaS quarterly reports (trust me, I’ve looked).

What’s interesting with LiveChat is that while SaaS revenue metrics such as global LTV are important to them, they’re purposefully not the single focus — or what you would call a compass metric.

“All those metrics that involve money are not defining our business. It’s all about customer happiness, and making a product that customers will use.”

To Szymon, revenue is an effect of what they do, not the goal to which they aim for.

“We were the first SaaS company on the Warsaw stock exchange…Our investors learned a lot about metrics… Now over time, they’re asking questions like, “What is the churn?”

Once they were able to clean up “legacy” subscriptions from the traditional payment gateways they were using and move to Recurly, the team wanted to dig deeper into the SaaS-specific metrics that this enabled. The first approach was to do this manually, extracting the data available from Recurly’s billing engine.

We wanted to better understand our business. We’ve been calculating churn, LTV and splitting them by subscription plans manually for a short period of time, before we found ChartMogul. We got all the statistics and reports we wanted by simply integrating it with Recurly. I can’t imagine running a SaaS business without knowledge that ChartMogul offers.

Nowadays, activities like breaking out LTV into a per-subscription-plan view simply involves adding the relevant filters in ChartMogul, and viewing the data — a far cry from crunching numbers in a spreadsheet, or dealing with raw exported billing data.

“Over the last 10 years at LiveChat, the only thing I haven’t done is creating the product by writing code.”

Szymon and the team clearly recognize that the culture of their company is key to the success of the business. They encourage employees to move around the company to different roles, and attract fresh talent from the large pool of students graduating each year in one of Poland’s biggest university hubs. 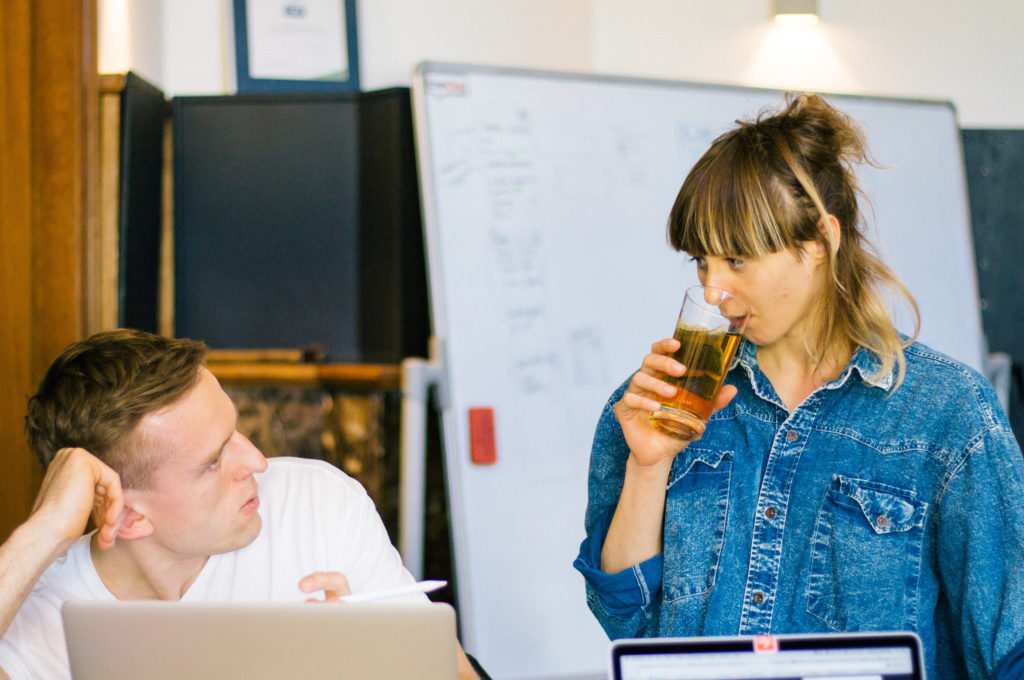 Nowadays the team feeds themselves on the excitement that comes from shipping a product to over 15K customers in an instant, and keeping as close as possible to the feedback they receive:

“It’s very rewarding when you have those customers using things that you’ve just released and coming back to you and saying, “Hey, this change is awesome, this is exactly what we needed.”

Sitting in a quirky room with blackboards for walls, Szymon explained that the company had at one point moved to a more ‘corporate’-feeling office, during their pre-SaaS period. It killed their creativity, and simply didn’t work. So now, with the current space starting to burst at the seams with its finite capacity, they’re looking for somewhere new to call home — but carefully this time. 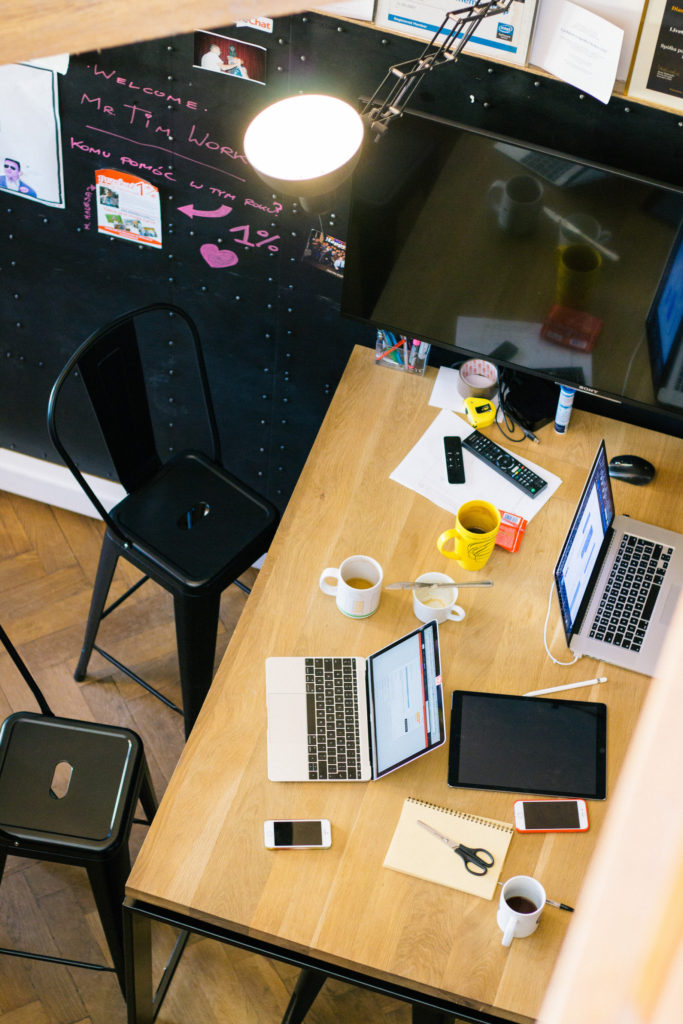 “I really appreciate the fact that we’re in this exact spot at this moment. That we’ve grown basically from zero to over 15K customers without spending any budget on customer acquisition. I’m proud that we’re still doing that — still focusing on growth.”

LiveChat tells a fascinating story, and the company’s chequered history has clearly made the team and its culture wiser and stronger when it comes to building a long-term, sustainable and profitable SaaS business. It’s likely that most businesses today won’t go through such a do-or-die transition, but perhaps if we could learn from those that have, we’d all be working to build a business with core values such as theirs.

Thanks to the LiveChat team for inviting me to their Wroclaw HQ, and tolerating my snooping around with a camera.

If your business needs an easy way to communicate with customers, you can get a free 30-day trial at livechatinc.com.