Is there room for SaaS in outer space?

NewSpace is rapidly growing, with technologies (and aspirations) reaching deep into space from around the world. We evaluate the NewSpace age and speculate on the role SaaS can play within it.

Space has been the next frontier for a long time. And now, after years of startup outer space analogies, rocketship emojis, and coopting terms like “escape velocity” — the tech industry has finally collided with real space exploration.

So, the applications of space are limitless and all around us. For that reason, in this article, instead of bringing space into software, I’d like to bring software into space. I want to explore how tech’s darling business model of late, Software-as-a-Service, might work within this burgeoning sector of NewSpace.

What exactly is the scope of opportunity when it comes to space, and where could SaaS and other subscription services fit?

State of the NewSpace industry

Well, we have lift off. And we’re speeding up.

There are 900+ companies in the sector today, worldwide. FastCompany reports that 10,000 private space companies will be launched in the next decade, according to Richard Rocket, the CEO of NewSpace Global.

The space industry has gone through a few different chapters to get to this point — a process which we in the tech world would call disruption! People debate how to define each stage and which stage we’re currently in, but here’s my breakdown:

It’s this commercialization, these startups behind it, that are shrinking timeframes and accelerating the cycle of innovation, well beyond the capability of governments with bureaucratic processes who are using their taxpayers’ money.

Indeed, Space Tech is the new frontier for angels and VCs as well. Investors are seeing the improvements, viability, and profit potential that were similarly promising with the evolution of SaaS.

So far NewSpace has absorbed more than $10B in private funding, from what some call “billionaire philanthropists” and the like. More notable, though, is how venture capital is taking off. 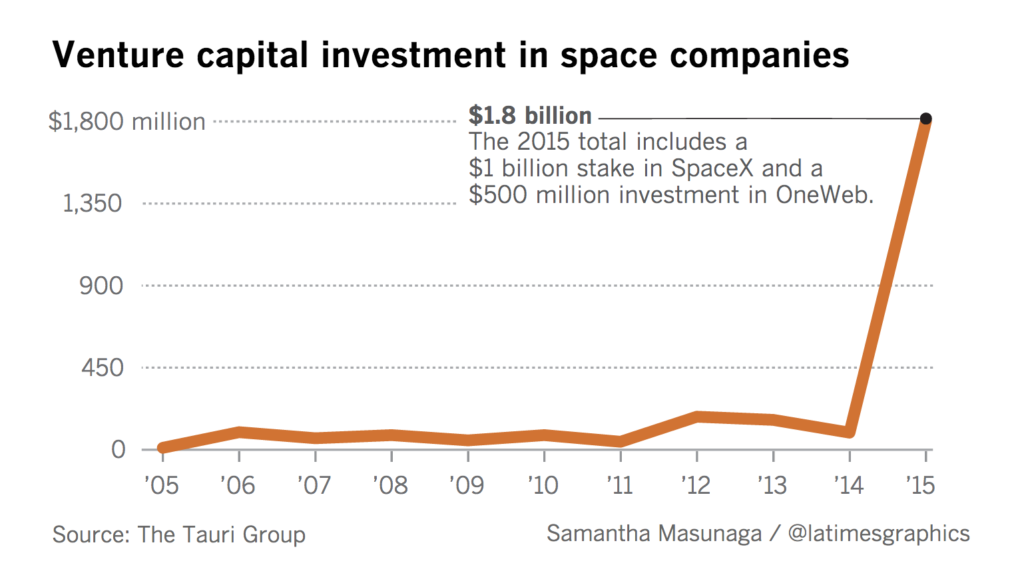 Sure, the majority of that crazy spike is big investments in established companies (not sure if we can say “legacy NewSpace” yet?). But even if you removed those two deals from the total, you’re still looking at an increase to $300 million spend in 2015. And we’re waiting to see just how high that’s climbed in 2016.

Who are these companies selling to? Just as in any other business sector, NewSpace contains products and services that target different customers. Before we continue, it’s helpful to take the standard business models and place them in the right context.

B2G – Business to Government. An interesting development of Space 2.0 and beyond is how now governments and agencies are becoming the customers of NewSpace tech companies. Mexico’s government bought a ride to the moon via Astrobotic. These customers include state space agencies, militaries, and other security authorities (read: spies).

B2B – Business to Business. B2B NewSpace companies provide hardware and services for other entrepreneurs and companies to take advantage of the opportunity in space. Rocket launching, ridesharing into space, software platforms to simulate satellites, etc.

B2C – Business to Customer. These NewSpace verticals include tourism and real estate. These are the sexier mainstream topics, since they feed fantasies about average people, like me, getting a spin in space. But, again, because I have to limit the scope of this article somewhere, I draw the line at speculating about B2C “astropreneurship.” I leave that to proper scientists, journalists, and Hollywood.

So what kind of business is emerging, really?

While famous companies like SpaceX get most of the attention, there are countless other services and verticals within NewSpace.

So far the major established verticals are satellites (and cubesats), rocket launching, and 3D printing. Other technologies, like mining for minerals and providing outerspace fuel, are growing in interest. And many, many other smaller niche services are just budding. There’s even a cleaning service for space now… that’s when you know it’s real. The Singapore company Astroscale offers services to monitor and remove “orbital debris.” Their vision is to ensure safety today and preserve a sustainable space environment for tomorrow.

Indeed, there is still a whole ecosystem waiting to be built out.

“There’s a wide array of components and technologies and high-level services that will sit on top of this whole space renaissance.” – Sunil Nagaraj, of Bessemer Venture Partners

In fact, NewSpace is emulating the SaaS industry

We’re seeing similar trends in how the sector is transforming – technological advances (and manufacturing developments) dramatically reduce cost. This lowers the barrier to entry, widening access and therefore also the various uses and applications of space exploration. All of this combines to encourage even further growth, perhaps even induce a Gold Rush as we’ve seen in SaaS.

Access. Technology advancements and reduced costs have opened the playing field, making space entrepreneurship a realistic possibility for others:

No need for expertise. NewSpace startups provide the above-mentioned access to other startups at a price. This removes the need for aerospace expertise; instead entrepreneurs can experiment, test, and develop their space products with the support of specific NewSpace services.

Winner-take-all dynamic. The first one to market “gets a vastly disproportionate share of the economic return.” (Sunil) But of course, this doesn’t stay true in every vertical; it can change!

The make-or-buy question. Decision makers ask themselves, “Do we really need to do this in-house?” Why invest so much capital in building your own rocket launcher or communications system when you can pay to use another company’s?

Platforms. Businesses create new services by building on each other. We’re observing a shift from products to platforms in SaaS as well.

So what space is there for SaaS?

It’s hard to break down the vast opportunities into commercial business prospects, to summarize them in a single article like this, simply because the possibilities are actually endless.

What’s interesting is that the as-a-Service-ification of NewSpace is just beginning, right about now. Some products are slated to be released in just the next few months.

Plus it’s fun to speculate how it might spread and evolve. Let’s go though a handful of verticals. As we go along, I’ll point out some low-hanging fruit that Chad Anderson of Space Angels Network just shared at the Disrupt Space Summit in Berlin.

I reached out to Sunil Nagaraj of Bessemer Venture Partners to get his thoughts on the role SaaS could play in NewSpace, and his first answer was to do with satellite software. He says we will need specific software for:

“managing the development, testing, and deployment of several versions of software to several hardware versions of satellites on-orbit. The needs are demanding because bugs can easily be fatal in space.” – Sunil Nagaraj

One service in this vein already exists. KubOS is a full-stack flight software for satellites, with ongoing support provided throughout the satellite mission. Their slogan has a familiar ring to it: “Space is hard … the software you use doesn’t have to be.” They offer their services as a yearly subscription.

Another service is coming that allows “astropreneurs” to experiment with software, before deploying it in space and running the potentially huge risks that Sunil mentions. Galactic Sky is a satellite virtualization platform for other “astropreneurs” to test and execute their ideas and algorithms on virtual orbiting satellites. The software is slated to be available to early access customers in the first half of 2017. Galactic Sky allows NewSpace businesses to keep innovating “without having to go through the traditional process of building a spacecraft, integrating with a ground system, and waiting for a launch opportunity.”

The scale and breadth of data accumulated in space is almost impossible for me to grasp, the variety of sources and multitude of purposes. “Electro-optical, infrared, hyperspectral, multispectral or other geospatial data.”

When I reached out to ask Sunil Nagaraj what he thinks the role of SaaS could be, his first answer was to do with managing all the data that satellites collect. “This could be simple storage/retrieval or include a rich interface that offers some analytics overlay. (Orbital Insight is an example of this.)”

Indeed, some believe data is the honey pot — and the true shiny object that investors are flocking to.

If that’s the case, then as Sunil suggests, analytics products will continue to be in high demand and will evolve to suit the complexities of extraterrestrial data. Plus there will be a huge need for data storage and transfer services as well.

At least one company is already developing a communications service. Audacy hopes to unveil a ground-based data relay service in 2017, with a space-based service coming in 2019, both of which would provide real-time communication around the clock. On their website, they seem to want to distance themselves from the complexity mentioned above by driving home the simplicity of their solution: “Integrating Audacy into your operations is as simple as installing a certified radio and purchasing a service plan.”

Perhaps, over time, such technology will expand to intergalactic SMS?

Print-your-own, as-a-Service: Astronauts, robots, or other space technologies could print their own tools in space. I smell a subscription opportunity here — a certain price guarantees you a certain amount of printed material, per month.

We already have the first 3D printer on the international space station. (Fun fact: the printer arrived there aboard a SpaceX commercial resupply mission.) The California-based Made in Space is a bootstrapped startup that helped NASA create the 3D printer. They’re now working on sending another commercial printer into space, so that businesses and scientists on earth can pay to make things that will then be sent back to Earth or stay in space.

Star tracker is navigation software used across technologies and hardware, including satellites, launch vehicles, and small spacecrafts. NASA offers star tracker software, and they bill it as “relatively inexpensive.”

But as the private sphere has been able to reduce the costs of space exploration by up to 90% so far, it’s likely there’s room for a SaaS takeover of NASA’s offering. In order to create a newer, cheaper, more agile star tracker software, a SaaS company would simply need to construct the complex database that actually powers star tracking:

…Unless, of course, another aerospace company offers their database of star configurations as a separate SaaS offering, in which case an integration would take care of that. Why build when you can buy, right?