Bootstrappers: SaaS startups finding their own route to $1M+ ARR

The model for early-stage success in SaaS is shifting. Let’s take a look at the shift happening in fundraising, and some of the businesses succeeding from bootstrapped-origins, as well as some different strategies up to and beyond that critical first $1M ARR.

In the business world, the term generally refers to:

“Financing and growing your business without the need for external assistance in the form of capital investment.”

In other words, it’s the “I’m doing it my way” approach to building a business.

There’s a buzz today in the SaaS universe around bootstrapping. The wind has changed in some way, and has spurred some conversation on the topic. So what’s the deal?

The growing divide between SaaS and venture capital

”When I entered the SaaS world 10 years ago (building a product on top of flash…) I knew very few founders running bootstrapped SaaS companies. Raising money was the main way to go. But this has changed and I now encounter, almost on a weekly basis, awesome bootstrapped software companies and micro SaaS.”

Clement’s view on the increasing viability of bootstrapping boils down to the following reasons:

And the above points make a lot of sense. It’s never been easier to build, market and grow a SaaS business — almost every aspect is being solved by tools and products on some level or another. Whether engineering, marketing, billing, analytics — there’s a wealth of advice and tools to help you along the way.

Historically, bootstrapping SaaS has always been an option — companies like Atlassian, Qualtrics and Mailchimp have all bootstrapped their way to success and even IPO in the case of Atlassian — but until now, it’s always presented a big tradeoff in one or more ways.

Bootstrapping has been the exception, rather than the norm. A path pursued by those true outliers who, in hindsight, seemed destined to find success through unconventional means.

Seed-stage fundraising for SaaS is getting harder

It’s getting harder for early-stage companies to raise a VC-backed seed round. Many SaaS-focused VCs including Redpoint’s Tomasz Tunguz  have discussed this on several occasions:

“SaaS company formation has fallen by 44% in the last 3 years. I’m using SaaS seed rounds as a proxy metric. I believe competition is a major driving force, especially since venture capital is conspicuously copious.”

Importantly here, Tomasz is using “seed rounds raised” as a proxy for company formation. So what we’re really seeing is that seed rounds are dropping. This is illustrated perfectly by Tomasz’s chart showing the number of seed rounds raised per year:

In fact, the stakes are raising across the board for SaaS companies looking for capital investment. Jason Lemkin, renowned SaaS VC and founder of SaaStr recently wrote about the top-end of the SaaS market:

“A funny thing happened as part of the last 2 years of this epic bull run: $3 Billion became the New $1 Billion In SaaS.  So maybe it’s time to change the definition of a SaaS Unicorn”

In his post, Lemkin discusses a similar theme to that in Tunguz’s article above:

“Multiples [of revenue] are not that impressive in SaaS today, and arguably too low to support the massive amount of venture investment in the past few years.”

So in the face of adversity in the form of tougher competition, higher standards for fundraising and growing incompatibility with venture capital, what do smart founders do? They dig in and hack their way to profitability, of course…

So who are the people out there on the ground, battling on the front lines of this bootstrapping revolution? And what are they experiencing? I wanted to find out. There must be something to learn here…

Canny is a SaaS customer feedback app, founded by ex-Facebook employees Sarah Hum and Andrew Rasmussen. Having completed the Y Combinator Startup School (a free 10-week program to educate founders), they proceeded to work on building the product without any outside investment.

Seven months after launching the product, the pair were proud to announce that they’d reached “ramen profitability” — covering both their business and personal expenses, all while travelling the world:

“If you can get away with it, you can save a lot of money working nomad. As long as you have Wi-Fi, you can work anywhere. We’re actually more productive working remotely because we don’t know as many people. All we do is eat, sleep, work, and explore.”

Getting to profitability within a year of launching clearly requires an incredibly lean operation, and the folks at Canny have optimized their lives around pulling off such a feat.

I asked Andrew for his input on the story behind this decision making.

What were the benefits of bootstrapping a product like Canny?

“I think bootstrapping is a great way to start a SaaS company. You don’t really need the money to get started, it’s so easy and cheap. You build a solid, profitable foundation for your company. You retain more ownership of your company.”

Now that you’ve bootstrapped to basic profitability, what’s the next step?

“From there, it depends on your goals. Lifestyle or go big? No right or wrong answer. I believe raising VC is more compatible with going big, and bootstrapping with lifestyle.” 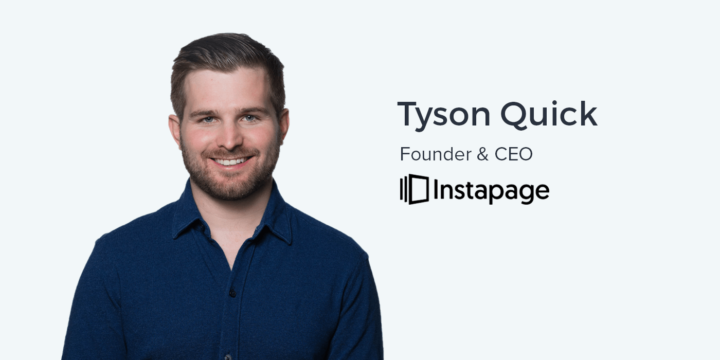 Instapage Founder Tyson Quick bootstrapped the company out of necessity, rather than choice. In a recent interview with Forbes he highlighted just how critical the situation was for him in the early days:

“It started with necessity. I didn’t have much to point to that would make institutional investment firms trust me, and I was so busy building out the beta product that if I dedicated even part of my time to raising money, we would have completely stagnated and died. It also would have been a terrible valuation at that time and I’d have given away too much of the company.”

Once the momentum started to pick up, Tyson realised that they wouldn’t need to raise capital at all, and continued to power the company’s growth through revenue.

Fast forward to 2017 and Instapage has over $10M in revenue and 130 employees across multiple countries.

“I would say that the most important thing for people that want to bootstrap is to find one particular problem that matters to people and work to solve it better than anyone else. Make sure that you validate that the problem does matter and people would pay to solve it. And stay focused.”

Tyler Tringas represents an interesting case for bootstrapping, primarily because his company Storemapper was built from the ground up as a “micro-SaaS”. But what does that mean?

“It is a software as a service business owned and operated by one person or a small team. These businesses are location-independent, high margin, low-risk with predictable recurring revenue. They are the lifestyle business of the future. I scrapped and scrambled my way to building and ultimately selling a profitable SaaS business.”

So the entire product was optimized to be lean right from the beginning. Recently, after 5 years of operation, Tyler sold the business (and documented the entire process).

“When you estimate ‘how will my SaaS business be doing in 6-12 months’ the answer is very bi-modal. There’s a very very large chance that it’s doing a bit better and a very small but non-zero chance the whole thing blows up in some unforeseen way. At least that was my estimate at the time and that’s why a key financial decision for me to sell the business was diversification.”

Is bootstrapping the new default for SaaS?

In 2017, we’re seeing the emergence of a slightly evolved version of SaaS business. One that can thrive on the playbook written by the companies that came before it. This new breed is tightly-focused, highly-optimized and altogether more robust. In an environment where it’s becoming harder to raise a VC-backed seed round without proven traction, revenue or product-market fit, it’s natural that startups are finding smarter ways to get there.

However, as Canny Founder Andrew Rasmussen stated, the path you take once you have meaningful revenue depends on your personal goals and aspirations. There’s still a clear split between those businesses designed from the ground up as a “lifestyle” business, and those with loftier growth goals. This is a personal choice, for which both routes are completely valid.

Also worth mentioning is the variety of alternative fundraising options available to founders today, such as crowdfunding, venture debt and others. The choice for founders is not purely “bootstrap vs. VC”.