It’s time for SaaS to be boring

If you stay up to date with the SaaS and B2B publishing trends (subscribe to our SaaS Roundup if you don’t!) you may have noticed a number of recently-published articles spelling doom and gloom for Software as a Service. Reading into all of them, you’d probably come away thinking that the industry has moved on to the “next big thing” and the model has no future in the tech industry or elsewhere.

Point Nine Capital’s Clement Vouillon started out with an argument that a lot of new SaaS businesses are no longer compatible with the VC model, in his article The Rise of Non “VC compatible” SaaS Companies:

“Founders in 2017 can effectively build something in their bedroom, building on an increasing number of “building block” tools, frameworks and API-based services. This means an increase in entries to the market, a lot more bootstrapped companies and overall decreased potential for the huge returns that venture capital demands.”

If that wasn’t a strong-enough sign, from Europe’s premier SaaS VC, Christoph Janz followed up more recently with a similar take on the topic, The growing dissonance between two business models (SaaS and VC):

“There will be more and more SaaS companies that, based on the “pattern recognition” that we’ve developed in the last years, we’d like to invest in but will have to pass on. We can only make 10–15 new investments per year and we’re obviously trying to find the very best ones — the outliers among the outliers, if you will.”

Just as Clement started, Christoph discusses the “rise of bootstrapped SaaS”, with some more specifics on how the VC is turning down deals that would have seemed mightily attractive to them just a couple of years ago. He argues that new SaaS businesses today will have to raise the bar even higher than ever before, with growth metrics and traction showing something that’s an “outlier of the outliers.”

He was also probably the first person ever to apply a quote from Daft Punk in a Venture Capital article. Nice one, Christoph! 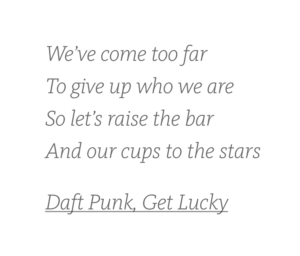 Noah Jessop, writing in Hacker Noon, takes the entire discussion a good few steps further with his all-out argument that SaaS is “dying”, in What Comes After SaaS?:

“SaaS’s own success is it’s own enemy — the cost and the time to build novel things has fallen significantly. Thus as a software company hits real scale, it’s left in a no man’s land — not large enough to stack, not worthless (or weak enough) to die — but too much competition — from the low end, the high end, from customers cobbling together a series of other tools — to prevent any real growth.”

All valid points, and many of those overlap with the points made in the aforementioned Point Nine articles.

So it’s game over, then?

Fortunately, the increasingly common “X is DEAD!!!!!” narrative isn’t usually quite as extreme as it’s made out to sound. In this scenario, the word “dying” simply means “not as sexy and hyped as it used to be.” Allow me to explain.

Let’s remind ourselves where SaaS is today

SaaS is a model for building and selling software products. It’s a way of selling and distributing software to customers that marries very well with the benefits that cloud computing brings: Always-on connectivity, scalability, low onboarding friction and a focus on delivering constant value to the consumer.

People want something fresh, new and exciting to hype. Whether AI, Blockchain or self-driving drone cars — all carry the sense of positive uncertainty and feeling of insane potential that we once felt about just running some software in the cloud.

It’s basically an expectation nowadays that B2B cloud software uses a SaaS model. In almost every team in a modern B2B business, from Engineering to Marketing, Sales to Finance, subscription is normality rather than the exception.

About a third of our operating costs at ChartMogul (excluding head count) are spent on SaaS, going to over 40 different products. The result is a more predictable balance sheet with very little capital expenditure and nice, evened out recurring costs featuring far fewer surprises. When evaluating new solutions, we actively seek SaaS, for these reasons.

The thing is, there’s nothing sexy about table stakes. People want something fresh, new and exciting to hype. Whether AI, Blockchain or self-driving drone cars — all carry the sense of positive uncertainty and feeling of insane potential that we once felt about just running some software in the cloud.

The recent uptick in discussion must have some substance to it, surely? Well, there are definitely some changes in the industry that have a significant impact for new entrants.

The barrier to entry is much lower

As Clement discusses in his article, it’s become significantly easier for someone to build a SaaS product from their bedroom — it may be the best time ever to start a SaaS business. Building-block API-based tools like Twilio, Clearbit etc. mean that products can be built by plugging different services together. This leads to…

If the barrier to entry is lower then the number of entries to the SaaS market are likely to increase. This is compounded by the unbundling effect, with smaller, more narrowly-focused services competing with those monolithic platforms. Virtually every vertical in SaaS today is fairly tight with competition. There’s very little “green field” left in SaaS. This means that…

As Christoph puts it, “Large VCs need multiple unicorns just to survive”. While there’s been an increase of companies growing to the $1-2M stage, this increase hasn’t been matched at the high-end ($100M+ ARR). What Christoph is saying here is that the techniques and pattern matching they’ve used to find successes is no longer working at the same rate of success.

So it’s not actually dying then?

Well, in the same way that Noah argues SaaS “is dying”, these things are also “dying”:

These things are pervasive in our everyday lives. In many cases, we’d be completely lost if they were truly taken away. New businesses are built every day that run on the above technologies. Tens of billions in revenue is made and the industry is as healthy as it’s ever been. It’s just not all that sexy any more.

I guess you could say that despite all of the doom and gloom, SaaS is just:

(Sorry Christoph. I had to.)