The Great NPS Debate: How, when, and whether to use it

The Net Promoter Score has taken the business world by storm in the last decade, and the dust is still settling. The famously simple metric has plenty of fans and critics. We’re here to investigate both sides and determine our own NPS best practices.

What NPS is and how it works

At the most basic level, the Net Promoter Score is a process for gauging customer satisfaction and gathering customer feedback.

NPS is remarkably simple. The metric measures customer satisfaction based on a single question.

How likely is it that you would recommend our company/product/service to a friend or colleague?

I.e.- How likely are you to promote us?

In this way, NPS indicates not only customer satisfaction but also customer loyalty. The first is attitude; the second is behavior. Especially in SaaS, there’s a definitive (and lucrative!) difference between the two.

Respondents answer by choosing a number on a scale of 0-10, 10 being the most likely.

Here’s how the scores shake out:

It’s most common to follow the question with an optional open-ended feedback section, where customers can explain and elaborate on their score. The qualitative feedback from this second question makes NPS doubly valuable.

Finally, the scores from all individual customers are then aggregated into one single number, a single company statistic which is the company’s Net Promoter Score.

Where NPS came from

Today more than two thirds of Fortune 1000 companies use Net Promoter Score, as reported by Bain & Company to Bloomberg in May 2016.

“Evangelistic customer loyalty is clearly one of the most important drivers of growth. While it doesn’t guarantee growth, in general profitable growth can’t be achieved without it.” – Reichheld, Harvard Business Review

Those of us in SaaS are very familiar with this by now; we know how vital customer loyalty is to the subscription model. We also might be familiar with the article’s tone. 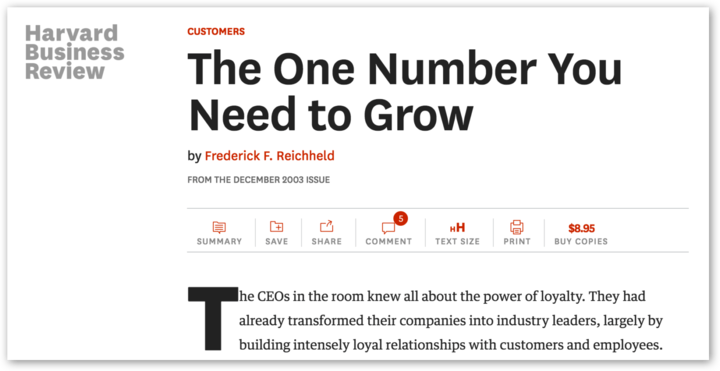 Its title, “The One Number You Need To Grow,” smacks of the ubiquitous headlines in today’s startup world, always claiming to hold the most important, the most true information that guarantees your success.

And it’s perhaps that very confidence that drew so much critical attention to the survey as a reliable metric. Research teams cited the title of that article, and other highly confident phrases in Satmetrix content, as points they wanted to challenge. These studies wanted “peer-reviewed, scientific investigations” that examined questions such as:

And thus, the start of the NPS debate.

Fans of Net Promoter Score include business executives across all industries and the venture capitalists who invest in them. The survey and metric have become so popular that a few standalone NPS services exist, such as Wootric and Promoter.io.

SaaS executives and VCs alike are always looking to leading indicators of growth. The connection is crystal clear and data-driven for revenue metrics, but not as much for Net Promoter Score. The logic follows that the more enthusiastic customers you have, the more new customers you can attract (and with less effort or investment). And this cycle becomes a growth engine.

“The only path to profitable growth may lie in a company’s ability to get its loyal customers to become, in effect, its marketing department.” – Reichheld, Harvard Business Review

In SaaS, customer loyalty is the bedrock. If you can mobilize and verbalize that loyalty, you then have a marketing system that is literally and figuratively priceless.

NPS is low friction for both sides. The survey is only two questions, which is easier for the company because response data is contained and easy to evaluate. Also, customers are more likely to fill it out because it’s so brief. As a result the company gets more customer data than they would otherwise. Response rates to NPS are generally much higher than traditional surveys.

3. It clearly suggests where to nurture customer base.

Many companies use NPS to gauge the happiness of customers, plus the viability of a word-of-mouth network. NPS results show strengths and weaknesses in your customer base. Customer success teams can work pointedly to improve customer relations — whether that’s bringing back around a detractor, or encouraging a promoter to actually make some referrals.

Investors like a high NPS score, of course. Happy customers will stick around longer, and that retention will become the engine of the company’s revenue growth. It goes beyond retention, too. Happy customers beget new customers (through recommendation), who in turn hopefully beget even more customers. This bestows a kind of human virality to the product, which investors love to see.

Investors also like to see an upward trend of successive NPS scores, which is “a good leading indicator that the company is not only focused on their users, but is improving its value proposition over time.” (Andreessen Horowitz)

Bill Macaitis, CMO of Slack, explained to Tunguz how a high NPS can positively affect other growth metrics.

“The larger the number of advocates for product, the lower the customer acquisition costs for the company, and the more effective customer success team will be.” – Bill Macaitis

To brush up on Customer Acquisition Cost (CAC) and other SaaS metrics, check out our free SaaS Metrics Cheat Sheet.

Those Dubious of NPS

Critics of NPS include… academics, staticians, market researchers, and perhaps the creator himself. Here are the main reasons for their doubts.

1. It’s not actually a proven indicator of business growth.

Several published studies and peer-reviewed tests of NPS could not find statistically significant relationships between the NPS scores and business growth. The founder himself admits that his original research was flawed, and that he never found evidence that high NPS scores are causally related to company growth.

Research in 2008 found that out of four scales tested, this NPS has the lowest predictive validity. Add to that the potential of skewed results that can happen with any survey: self-selection bias or non-response bias, for instance.

To combat this problem, Bain & Company published a guide on how to shape NPS into a reliable metric.

We’ll detail when and how to use NPS below. But a common criticism is that companies send the survey too frequently. There is such a thing as diminishing returns when it comes to customer surveys. Results become less representative.

The other common criticism is that companies rely too heavily on NPS alone. They don’t use any other measurements of customer experience and satisfaction to complement the Net Promoter Score.

No metric is perfect

It doesn’t need to be perfect. There’s no problem testing or using a metric once you’re fully informed of its limitations. The danger is only if you subscribe to the wishful thinking that “the next big thing” in startup strategy will be a surefire way to improve your business.

Basically, apply the Net Promoter Score survey with the same intellectual honesty you use with the rest of your business. There are still valid advantages to using NPS. Evaluate what value you can get from it and where it might fall short.

And, of course, conduct the survey as it’s intended. Shaped by all of this research, here are the best “best practices” we came up with.

How to conduct an NPS survey properly

Conducting an NPS survey is as simple as you might guess.

Most companies send it through email. There are tools you can use, whether it be a sleek survey from a service like Typeform, or a third-party company dedicated to the Net Promoter System.

Our bottom-line advice would be to use any tool that allows you to organize and filter the responses on the backend.

Who to send it to

Each survey should go to a blind subset of your customers.

Bonus: NPS can also be used internally to measure employee satisfaction and gather employee feedback. It’s not as comprehensive — and therefore not as telling — as a more formal employee engagement survey. And of course the follow up is completely different.

When to send it

Some companies send it to all of their customers simultaneously, at some regular interval like once per quarter. However NPS tools recommend sending the surveys frequently, but always to a different subset of your customers. That way you can monitor how the scores evolve as you pivot and tweak your service, rather than getting a static feedback dump once every three months.

1. At regular milestones in the customer lifecycle.

Not too frequently! Over-surveying leads to survey fatigue and unrepresentative results.

Don’t trigger the NPS survey on customer behavior. Don’t base it on an interaction with the company, and try to avoid giving that impression to your customers.

How to calculate an NPS score

Here is the most common way to calculate it:

Then do a little subtraction:

There’s also a debate about whether there are industry benchmarks for NPS scores. There is no universal NPS scale by which to measure any company. But Zendesk conducted some research that found averages and benchmarks within industry niches.

“Best in class companies achieve a score of 70 on a scale of 100, but according to Zendesk data, the typical B2B software company achieves only 29.” – Tunguz

Those of us in SaaS are always looking to benchmarks to judge our performance against the competition. But when it comes to customer experience and NPS, put benchmarks aside. There’s no real use in comparing yourself. Instead, focus on improving your own numbers. Create your own internal benchmarks. Which brings us to the next section…

How to make NPS results actionable

In fact, the value of NPS lies in the changes you make after the survey is over. So what to do once you’ve collected the feedback? First, you thank your customers for taking the time give it. Then you act on it.

Yep, first and foremost, disseminate the open feedback sections beyond executives and management to relevant front-line employees and teams.

“If NPS does its job, you will identify broken processes and workflows that normally frustrate staff. Since a poor system affects customers, don’t expect them to hang around for too long. And don’t expect staff to either.” – Typeform

Customers who gave 9s and 10s are your prime target for cultivating them into advocates (or evangelists, or whichever term you like). If they’re not already talking about you, they probably will. They might even be happy to! So try directly asking them to recommend your company to others.

Check out some other word-of-mouth strategies for B2B.

This all depends on what’s scalable and cost-effective for you. For some companies, it’s not feasible to reach out to every detractor, understand their complaints, and attempt to coax them back to liking you. But it is probably wise to reach out to those customers who are high value, or those who have left scathing or otherwise impassioned feedback in the free response section. You’ve given the opportunity to speak, and you should make them feel heard.