Practical advice on starting a podcast for your business

The chances are, if you’re looking at content strategy in 2016, you’re at least thinking about starting a podcast. There are a few things you probably won’t learn upfront — so here’s a collection of things I’ve learned over the last couple of years.

So you’re thinking of starting a podcast as a marketing channel for your business? Great! Let me share some experiences with you.

If 2015 wasn’t the year of the podcast, it was at least the year that millions of people realised that the format (which has been around for well over a decade) has some considerable value, in the world of smartphones, and connected car radios. What we’re seeing now is the evolution of the radio show into an on-demand, internet-based medium with huge audience potential. And of course, where there’s an audience, there’s Marketing potential…

Currently, I listen to about one hour of podcasts per day, during my morning routine and whenever I’m doing tasks which don’t require much brain power (e.g. washing the dishes). That’s more hours than TV or books manage to get out of me.

I started experimenting with podcast product a couple of years back, and eventually started my own Berlin Startup Radio — more as an experiment than anything else. After a handful of episodes and being featured on iTunes, the show got put on hold rather quickly, as I needed more hours in the day to focus on work.

Then came ChartMogul and the need for a content strategy. I saw the need to do something different in a space with so much noise and competition, and a podcast seemed like the logical choice for expanding our audience in a channel with a lot of potential. Plus, I already knew my way around the tools (more on that later).

Podcasts are basically RSS feeds under the surface

The way that podcasts work is as follows: You host your podcast somewhere (we use SoundCloud), and that host gives you an RSS feed. This is the feed that you submit to different podcast “stores”, such as iTunes. iTunes does not host your podcast. It just indexes feeds from the thousands of shows submitted to it.

Because of the RSS-esque way in which podcasts work, you won’t be able to get much in the way of data on who your audience is, or how they’re listening to your show. Analytics depends on the host, but at most you’ll be able to see:

…that’s about it in terms of hard numbers. Not great, is it?

Warning: If you use Feedburner, it’ll tell you how many subscribers you have. Don’t look at this. It’s actually an estimate based on the number of web requests to the server, and is pretty meaningless for the podcast format (more on this here).

The podcast ecosystem is fragmented

There has been some turmoil and subsequent debate in recent months over the future of the format. Apple “owns” the vast majority of the audience, through through the iTunes store and Apple’s built-in podcast app. The industry therefore relies on Apple to drive improvements to the specification that would allow for better data and monetisation options. This has resulted in some businesses creating their own walled-garden solutions, which obviously completely break the open nature of podcasts.

Bottom line: You’re going to have to submit your podcast to multiple stores and marketplaces, and when promoting you’ll need to provide multiple links depending on what platform the listener uses.

Above all else, it’s the story that matters

Any Marketing professional should be familiar with this lesson, because it applies to blog posts and everywhere else with content (regardless of the format), but I thought I’d reiterate it here:

Equipment and production value always come second. If you’re starting a podcast and you don’t have a compelling story to tell in the first place, don’t bother.

In the same way that you can’t put lipstick on a pig, you can’t put your pig in front of a $2000 microphone with a fancy music track and expect it to sound better.

Transcribing (repurposing) is worth the effort

There is no such thing as SEO for audio files. If you want to fully leverage the awesome content you’re investing in by starting a podcast, you’re going to need to get it transcribed and publish it through your usual text-based channels. Plus, some people just prefer reading!

Here’s an example of a podcast we transcribed and turned into a written post: Podcast | Written post

Try your best to get the show right during the recording. It’s so easy to say, “We’ll make that part sound better later” — but the reality is that the amount of time required goes up exponentially the more you decide to do in post-production. Aim for simplicity.

Super important tip #1: If you’re interviewing people, the likelihood is they won’t be 100% comfortable publishing everything they’re saying. The best thing you can do is tell them they have complete “edit rights” over the outcome (i.e. they can ask to have something removed). This will let them talk much more candidly during the interview, rather than closing up because they’re worrying about what they can’t say. 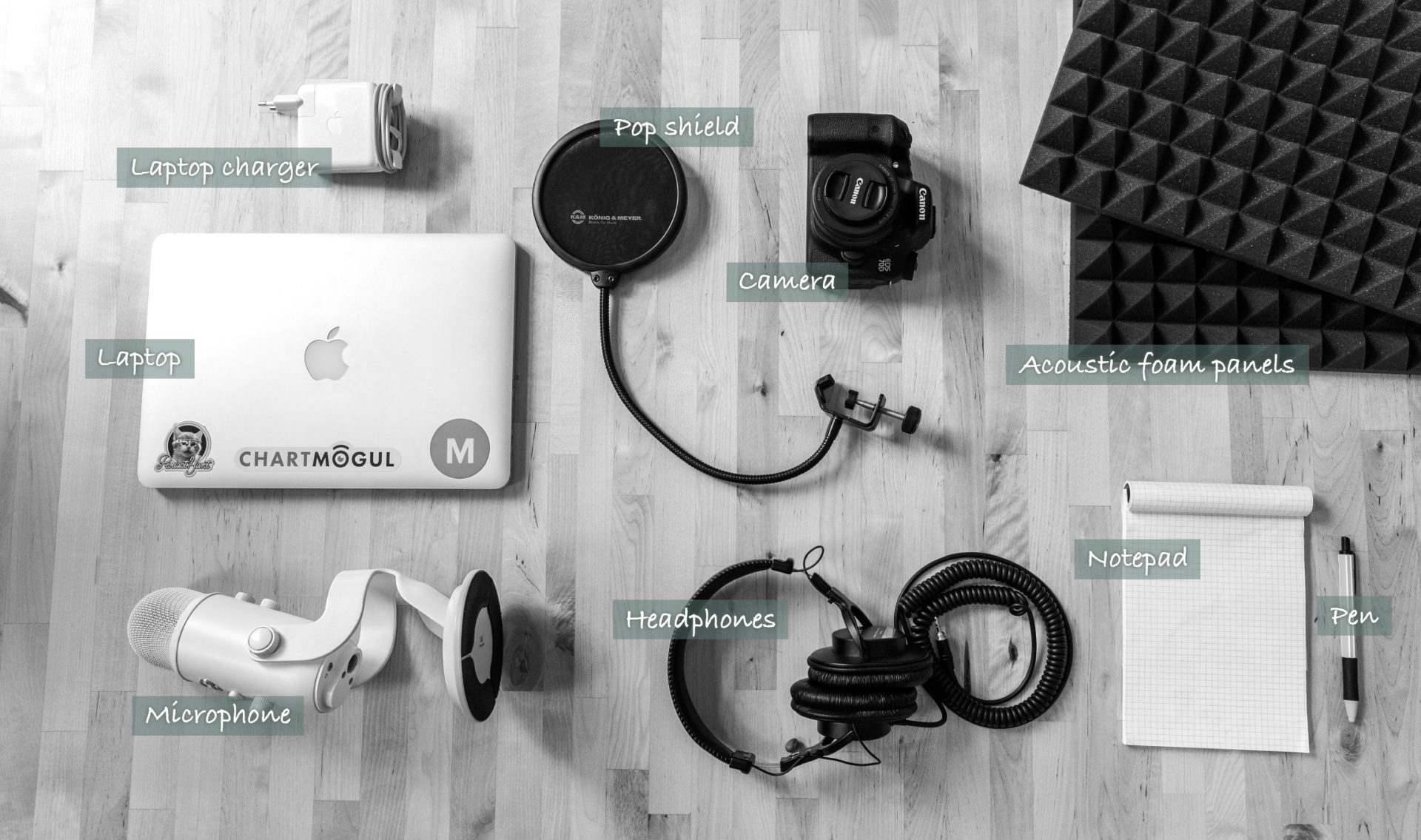 The 6 tools I couldn’t live without

Super important tip #2: When used in the right way, music can fundamentally change the feeling of your podcast. The first time we put music in an episode, along with a vocal intro, the result blew us away. Listen to the first part of this episode to see what I mean:

Zero to publish: An overview

Super important tip #3: If you followed my advice from earlier and gave the interviewee full edit rights, you’ll need to give them access to a draft of the episode to review. With Soundcloud, you can upload a track and make it “private”. Then when you hit the Share button, you’ll get a secret link to the episode — send this link to your interviewee.

Let’s assume you’re doing an interview with an entrepreneur over Skype, since this is a fairly common scenario. There are some specific things you can do to make sure the experience is a smooth one for both sides:

Super important tip #4: Listen to this interview with Cal Fussman on the Tim Ferriss show podcast. You’ll gain a HUGE insight into what it takes to master the art of interviewing.

“It took me 10 years to understand that an interview was more than Meet the Press. Then another 20 [years] to figure out that it was more than sitting down with George Clooney and having the time of my life.”
– Cal Fussman

Honing your skills and sharpening your tools

If you are not embarrassed by the first version of your product, you’ve launched too late.
– Reid Hoffman, Founder of LinkedIn

The above quote applies when starting a podcast (or most creative endeavours). Your first episode will be rough around the edges. You’ll want to screw it up and toss it in the trash, to start over again. Just publish it, and move on.

The best thing you can do is publish, iterate, publish. Let’s be realistic here — nobody’s really going to listen to that first episode. You haven’t got an audience yet! Put it out, and move on. Over time, you’ll start to make changes that signify a shift towards:

Good luck! See you on iTunes…